Tucked away in northern New Mexico, Taos is a mountain steeped in solitude and authenticity. If you’re driving from Colorado, an unfamiliar sight awaits — along the just five hour drive from Denver, two of those hours are spent without seeing another car, making the I-70 slog some of us are familiar with seem so not worth it.

Founded originally by miners in the 1800s, it was not until 1955 that two German émigrés, Ernie and Rhoda Blake (originally Bloch), thought to build a ski area in the picturesque valley. The note about the Blake’s last name is intentional because it helps to define one of the most charming characteristics of the mountain: about half the runs have German-inspired names, the other half from Spanish (Mucho Gusto, I’m looking at you!). Along with the naming conventions, the style of architecture at the base and dotting the mountain is a delightful portmanteau of chalets and low-slung adobe, often with dried chilis hanging outside the entrance. Like so many great mountains, there is a lovely little road that leads up to Taos Ski Valley, but as a pro tip, head out a bit early so you’re not stuck in stop-and-go traffic on your way up.

The mountain itself is like a cross between the Alps and classic Rocky Mountain skiing. Kachina Peak, which can be seen looming over the mountain, is above timberline and lined with spindly European-style chairlift towers making their way up to the exposed peak. If you’re wanting to ski the steeps, but still feeling intimidated by the sheerness of the peak, check out West Basin Ridge or Highline Ridge, both accessible via hiking from Lift 2. Oh by the way, their lifts don’t have names aside from the Kachina Peak Lift. It’s an accountants dream.

The steeps at Taos are no joke and you need to be ready. Catching them after a powder dump means mostly untracked lines through steep gullies, and there are enough cliffs and pillows to satisfy any jumper. Just keep in mind that the snow might be a bit wetter, and plenty of it will want to come with you on each turn down the mountain. 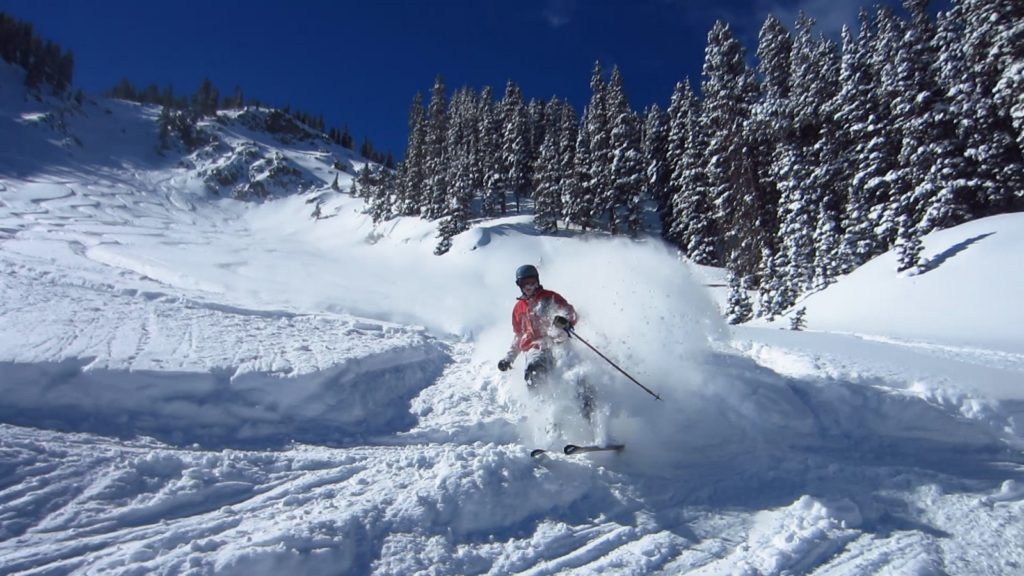 If, however, you’re not feeling the hike up to either ridge, there’s plenty of the good stuff hiding below. Check out the trees on Castor, Blitz, and Reforma under Lift 2, and keep an eye out for the rabbit hole gate far skier’s left on Blitz. Dip in and you can sneak into the lower part of the chutes AKA the land of absolute bomber turns. Walkyries Bowl/Chute offers a similar experience, but because it gets a lot of sun, be mindful on one of those “dust-on-crust” kind of days. If you don’t know what that means, imagine biting into peanut brittle topped with whipped cream–soft of top, crunchy on bottom.

What About Lift Lines?

Like any mountain roped into the whole Epic/Ikon quagmire, you can expect some lines at the bottom with one express quad working its little heart out to spread folks out across the mountain. Fret not, though, because once you get through the first line, you will likely not encounter more through the rest of the day.

What’s a mountain visit without fresh donuts? Forget your keto diet, there is a donut stand right next to the Gondolita AKA the cutest little gondola in the world. Grab a half dozen for $3.50 and enjoy that fried fatty goodness as you make your way back to the car. It’s good for your skin.

So if you want to get away for a bit, and I know you do, head South. Denver folks can get there in 5 hours (less than a drive to Telluride), Amarillo fams five and a half, and everyone else, a plane! And finally, like so many great mountains, you can find discounted tickets for Taos here. Hop to it!