After 2-Year Hibernation Spring Flings Are Back

That annual ritual to goofiness, a.k.a. spring shenanigans, has risen from its COVID-19 enforced hiatus and is resurfacing at many ski resorts across the continent.

From pond skims to music festivals, from slush bumps to retro costume contests, skiers and snowboarders again have the opportunity — not seen since the spring of 2019 — to let it all hang out as the season comes to a close.

So don your coolest neon onesie and partake in a spring fling at one of these selected resorts.

The Big Grass Music Festival makes its return to Big Sky, and for the 14th time the Montana resort has brought some fine blue grass and roots music combos, including the Sam Rush Band, The Traveling McCory’s and Keller Williams, to liven up the place from March 31 to April 3.

A-Basin is celebrating 75 years of providing some of the greatest high Alpine terrain in North America and it all comes to a head April 1-3 when the Colorado resort presents its 75th Anniversary Weekend. Events include Bump and Bash, a ‘70s style mogul contest; a themed dinner; an uphill ski challenge, and a scavenger hunt on A-Basin’s double-diamond East Wall. And, of course, the party’s always happening at The Beach, the resort’s famed parking lot tailgate gathering.

The homey central Idaho resort is conducting a Gaper Weekend on April 1-3, with patrons encouraged to put one their most outrageous ski apparel — jeans, onesies, hideous neon ensembles — to celebrate the occasion. Festivities include a beer relay and, of course, a costume contest.

Wyoming’s Teton range will come alive with the sound of music with the return of the Jackson Hole Rendezvous Spring Festival, which takes place April 1-2 in both downtown Jackson and at the resort base area. Featured acts include Ben Harper and Innocent Criminals, Cold War Kids and Fritz and the Tantrums.

Kids 18 and under can have a day dedicated to their youth when the BodeFest takes place April 2 at New Hampshire’s Cannon resort. Bode Miller, perhaps the most decorated American male ski racer, is playing host for day-long event, which includes a run with Bode and a fun race. Proceeds benefit Bode’s nonprofit Turtle Ridge Foundation.

Like a phoenix, the Lake Tahoe-area resort, which was devastated by the Caldor wildfire last August and has been closed for the 2021-22 season, will rise from the ashes by spinning a couple of lifts for a couple of days (April 9-10). The resort, which was planning to celebrate its 75th anniversary season, will pay homage to its past on that day and is asking patrons to break out their best Sierra swag.

The Caribou Cup returns to the Quebec province resort on April 9 with its celebrated pond skim (crazy costumes mandatory). Or perhaps attendees would like to try their hand a crossing the artificial — and tres icy — pond on foot via floating mats.

Vermont’s Beast of the East is presenting its Dazed and Defrosted event on April 16, which features a day of soft bumps, cold brews and hot live music provided by The Alchemystics (Caribbean/global roots music) and The Sideways (pop/jazz/funk/soul).

The Colorado resort closes out its season with a three-day event (April 22-24) known as Sunsation. Stein hoisting contests, free live contests, mountains of swag and the Hella Hectic pond skim challenge are among the attractions. 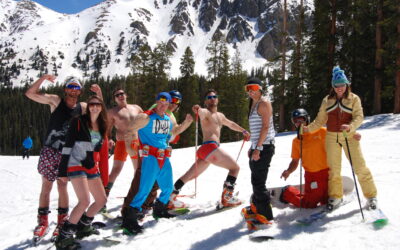 Sprang is Sprangin' For much of the country, Spring skiing has been the norm for a good chunk of time. The sun has been shining, the snow melting, and the guns a-blazin' (biceps, that is). If, however, you haven't been flexing your spring muscles, there are some... 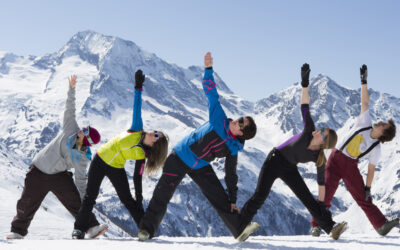 Why Skiers and Snowboarders Need Yoga (And How to Get Started)

Your body has taken a beating. Between a full season with variable conditions, maybe working at a desk full-time, and now slushy spring skiing, it's time for a refresher. Yoga can be a powerful tool to help extend your season and keep you on top of your game on the...