What’s the best way to get down the mountain in style?

You may have seen telemarkers here and there, those funny knee-droppers, and wondered, ‘why would I ever want to do lunges down the entire mountain?’ Well for some of us, your author included, telemark represents a totally Zen way of skiing, one where there isn’t a huge rush to get down the hill so much as a focus on enjoying each turn as it transpires. There are always going to be limitations with however you want to get down the mountain: snowboarders will lament the ever-present catwalks at some resorts, the intense muscle burn that being forced to stay on heel- or toe-side creates, and let’s not forget the terror that comes with getting off at the top of the lift, especially for beginners! For regular old skiers, you’ve got a lot of gear to account for, and a set of skis along with poles means that when you fall, you’ve got 4 times the amount of equipment that can catch you up and exacerbate the fall.

Today we’ll explore some of the alternative methods available to us to get down the mountain: 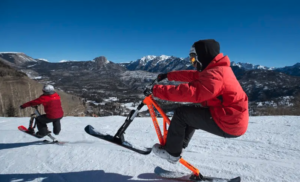 Yes, you read that right. While some people will take their bikes with huge wheels on snowy roads, that’s not what we’re talking about. But if you want to laugh at the prospect – and terror – of what riding a bike down a mountain, just check out this video from the annual downhill mountain bike race at Les 2 Alpes. Yeah, no thanks, I’ll stick to just regular ol’ skiing.

With ski-bikes, however, you’re given much more control, as the bikes literally have skis on them, and otherwise function as a bike. It can be so much fun to watch someone power down the moguls in these, though more so than other forms of riding, a helmet is strongly encouraged, lest you go head over heels. Don’t wanna crush that melon, after all! 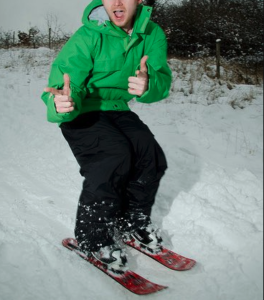 Hilarious contraptions that bring happiness (and tired quads) to the user, as well as to everyone watching them, snow blades probably have already had their day in the sun in the mid-aughts. The smaller skis allow for quicker turns, with the caveat being that there is less stability overall for the user. Which, in turn, makes for some good comedy watching some wipe out repeatedly, especially on a powder day! A definite advantage to these puppies is the binding setup, in that you can just use regular old ski boots, onto which the bindings clip securely. A leash for each leg is a necessity, as you don’t want to be digging around on a snowy day for something half the size of a normal ski! 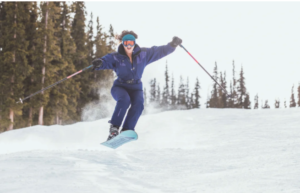 A personal favorite type of skiing device, one which, should I ever get the opportunity to use, I will leap at, the monoski can perhaps be seen as a relic of yesteryear. Straight skis go a bit beyond my days in skiing, but it is easy to imagine that having one piece of wood would have been more helpful for the schussing-style of skiing that dominated up until the parabolic (aka shaped) skiing revolution of the late-90s. Seeing a monoskier today is like glimpsing a unicorn, as they are not easy to find, and the design itself (read: lots of pole pushing) leaves a certain something to be desired.

Still, like any of these other techniques, someone who can shred down the mountain on a monoski is worthy of intense respect, and it’s safe to assume that they have tons of suitors, considering how interlinked it is with sex appeal. Kidding, of course, but hey, it’s still cool to watch anyone rock something out of the ordinary! 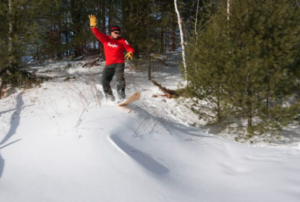 The last one we’ll profile is a bit more niche than the others, and it’s actually two different takes on snowboarding: a snurfer is basically a cross between a surfboard and a snowboard. There are no bindings to speak of, and instead a leash is attached to the very front of the board. The user then holds on for dear life as they make their way down the hill.

For an experienced surfer, I’m sure it’s no big deal, but given the lack of safety restraints, you won’t be seeing this on the resort near you any time soon.

Perhaps one of these alternatives to skiing has sparked your passion – like always, use caution when trying something new, but we hope to see you out there shredding in an unorthodox way! Regardless, check with us first for the best deals on tickets, lodging and gear, so you can spend your coin on these contraptions instead.