An Atmospheric River is About to Dump on California’s Mountains

One to two feet of snow this weekend!

An atmospheric river is shuttling into the California mountains this weekend and we are preparing for monster snow totals. When we say monster, we mean up to two feet of snow will be falling on the Sierra Nevada starting tomorrow. Here are just a few of the predicted snowfall totals coming up as told by OpenSnow.

What is an atmospheric river anyway?

Imagine the flow of water at the mouth of the Mississippi river coursing through the air above your head. That is how much moisture is picked up from the tropical Pacific Ocean and delivered to California’s coast. For different parts of the state an atmospheric river (AR) can mean drastically different things. For the lower elevations, AR’s mean heavy and sometimes damaging rain that can result in floods and mudslides. For higher elevations (and for what we’re most interested in), AR’s mean heavy heavy snowfall, like the extreme example we saw last February.

While they may be extreme, atmospheric rivers are vital to California’s snow pack that sustains both rivers flowing down to the coast and the ski resorts we love to ski late into the year. If you’re still curious about how these things work, take a look at this infographic from NOAA. They understand a thing or two about weather. 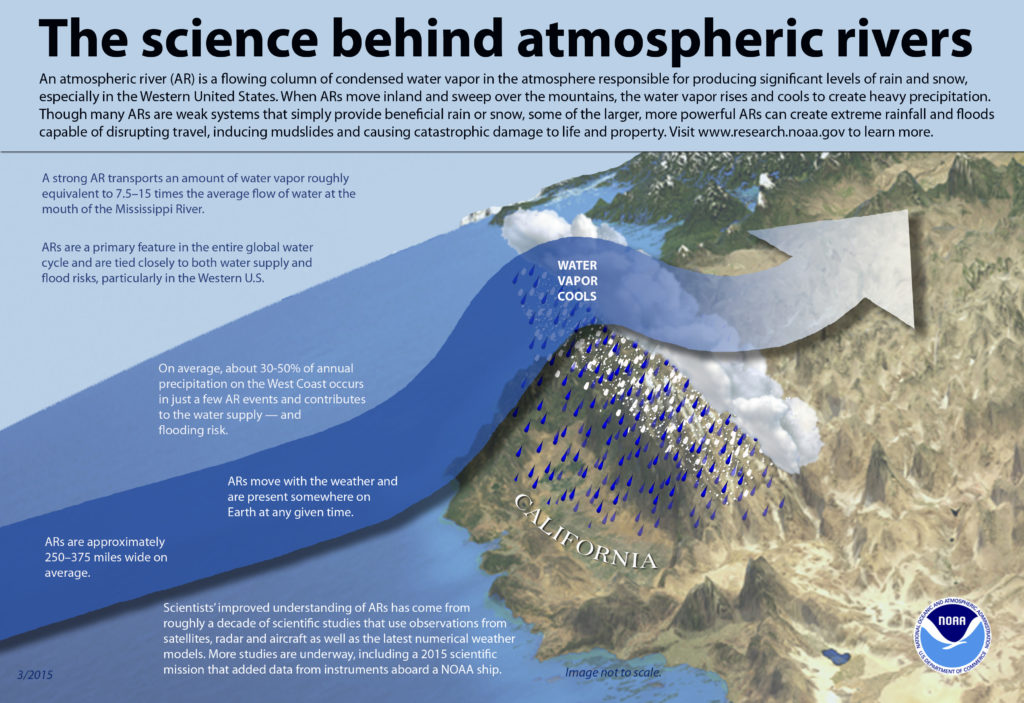 The details of an atmospheric river. Photo provided by NOAA.

To shred or not to shred?

With all this snow, is it time to head up to the mountain? First of all, yes–this could be one epic weekend–and if you’re headed to Sierra-at-Tahoe, we have lift tickets up to 45% off that might whet your whistle. Second of all, Sunday might be the day, with 7-11″ of snow predicted to fall overnight on Saturday. Then, on Sunday, the clouds are predicted to part and leave you with a potentially incredible bluebird day with temps hovering right in the 20’s. If that’s not a ski dream come true I don’t know what is.

The Triple Dip La Nina and Its Impacts