Ahh, it’s that time of year again. It has many names, among them “ribbon of death” season, “shark” season, and of course “wait in line for 25 minutes to ski one crummy run” season. They all are referring to the same thing, which is the somewhat gnarly conditions we must put up with before the good stuff starts opening. For those of us keeping an eye on which mountains (mostly in the West) will open first, it’s good to keep in mind a few things about early season so you can properly enjoy it without ending your year prematurely.

One event illustrates it perfectly: 36 Hours. For some context if you don’t feel like clicking the link, 36 Hours was an event hosted by Keystone in the mid-aughts to help drive the stoke for the year ahead, as well as boost early ticket revenues. What it entailed was having a team of skiers/riders sign up to ski the mountain for 36 hours straight during the first week of December.

Yeah, this sounds like a great idea already, right?

Well, it turns out that the event was also a great excuse to party, and while measures were put in place to contain this somewhat after the first year or two, there were still other, obvious concerns, namely the fact that the snowpack in early December is probably not enough for everyone to ski it safely, especially at night, as the night skiing offered by Keystone really helped to complete the gimmick.

While your author was never able to partake, friends and relatives were, and their experiences ranged from the awesome, to the borderline surreal, to the immensely painful. As this article is about approaching early season with care, we’re going to focus on the immensely painful one.

The scene was set: 2007 was a good year for early snow, enough that there was more terrain open than might have been expected. The kind of conditions where if don’t mind getting a few scratches (or have a rock pair that is designated for that specific purpose), it can be a total blast, especially when the snow comes early. 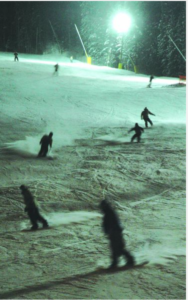 But with the snow comes a false sense of security – it’s not February on a good year, where the base is deep, and when you fall you just get hugged by the fluff. Instead, as my dear cousin found out, those pillows that look so enticing can end your season quicker than you can blink. In this case, one of those pillows was – yep, you guessed it – a rock, and while he didn’t land on that one, it was the one just below that quickly changed the situation from bacchanalia to panic. One midnight ER visit later and he was couch-bound for the rest of the year.

This is not to say that early season can’t be a blast!

There are tons of great things about it – that special feeling of getting up early for the first time all year, no traffic on the way to the mountain, getting to wear your new gear, and of course posting your sick line down the ribbon of death on Instagram, but it’s not the time to go big, and especially to treat the trees with caution – that can wait until the base fills in the dangers lurking beneath those first few storms. It sucks to wait, we know, but in the meantime, check with us first for deals on ski tickets and lodging, so you can be well prepared for the epic year to come!

Stay frosty out there!