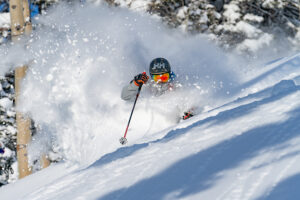 The holidays have passed, and with them have gone some of the crazy lift lines that happen because of the ever-increasing popularity of skiing. But what if there were a place where locals consider a “busy day” to be one where there are even just a few people in the queue, as opposed to skiing straight up to the lift? And what if such a place were also to receive 500+ inches of snow a year on average, with over 2,600 acres of skiable terrain to explore? Well, boy are we in luck, because Grand Targhee happens to match those criteria to a ‘T’!

While the mountains are as old as time, Grand Targhee Resort (pronounced Tar-Gee, the G is not silent) itself, which almost straddles the Wyoming-Idaho border, was founded in 1969, making it one of the younger ski areas out west. I say younger, but hey, that’s still 52 years of perfect conditions. The ski area gets its unique name from a combination of its proximity to the Grand Tetons and from Chief Targhee, the head chief of the Bannock tribe, one of several tribes for whom the Tetons’ majesty was understood well before anyone thought to ski down them.

To access Grand Targhee, one is allowed the privilege of driving through the picturesque Teton Valley, which weaves from Wyoming to Idaho and back again to Wyoming. Don’t ask me how they drew the borders here! Not only does the mountain feel nostalgic due to the relative paucity of crowds, but it has also been family-owned for much of its existence. The mom-and-pop nature of Grand Targhee helps to further the homey vibe you feel as soon as you walk from the parking lot into the base area.

As if the beautiful drive in weren’t enough of a selling point, on the rare day where it isn’t dumping snow, the Grand Teton is visible from the top of the mountain. With that beaut of a mountain leading the way, it helps to give the ‘Ghee, as it’s affectionately known, one of the prettiest sight lines in all of ski-dom. 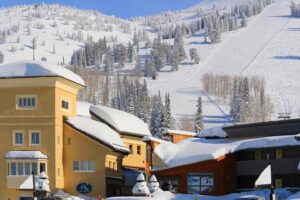 A beautiful, albeit rare sunny day at the ‘Gee Photo credit: Halle Jae

So, all this talk about the ski area, but what’s it like? For starters, you’re bound to see a higher number of people on telemark skis, partly because most of the terrain is not super-duper steep like you might see across the Teton Valley at Jackson Hole, or up north a bit at Big Sky. That is not to say however, that Targhee cannot bring the pucker factor–the chutes off skier’s right of the Sacajawea chair have tons of lines that’ll make the hair stand up a bit on the back of your neck. Again, it’s a great thing that the mountain gets over 500 inches of snow, because you can go bolder here than you might elsewhere and not pay for it, physically (though like always, be careful, and know your limits!).

If you’re feeling the urge for your stomach to turn and churn, simply take a peek off the backside of the mountain. You’ll see a sheer drop, hundreds of feet, which in addition to being the access point for some gnarly backcountry skiing, is also the site of Jamie Pierre’s famous record-setting 255-footer off the hike to Mary’s Nipple.

Beginners have their own wonderful area of exploration off the Shoshone lift, and a fine contingent of blues and blacks can be found throughout the frontside of the mountain. If you’re feeling indulgent, check out Grand Targhee’s snowcat skiing operation, which gives you access to 600+ acres of the driest, fluffiest stuff you’ll ever see in your life. What’s more, the cat skiing terrain comes in the form of bowls, glades and steeps of just the right pitch. Lunch is included, too, which is always a bonus!

One thing to keep in mind with all this snow and cloud cover is you’ll want to have the right goggles, if possible. Like can happen in so many alpine environs, skiing when the light is flat is a difficult task. While there are trees that help break up the unending canvas of fluffy white, having a pair of brighter lenses certainly pays off here. Keep in mind as well–when you see the catwalks littered with what appear to be pine needles, these are like guardrails of a sort. They will keep you on the trail. Trust me, you’ll be grateful for them! 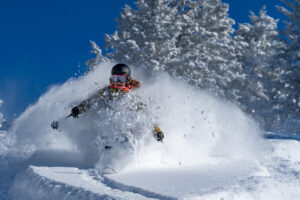 Could this be you next? Photo credit: Halle Jae

The hidden gem that is Targhee awaits you, and be sure to check with us for the best deals on lift tickets, so you can spend more time in the waist deep, and less time in line!!