There is something nostalgic about riding up a fixed-grip chair, as it can be the perfect place to enjoy a snack or beverage, and the pace lets you rest your weary legs as you prepare for the next charge down the hill. On a blower day, it’s fun to watch the snow accumulate in half-inch increments as you slowly make your way up the mountain. But, alas, the faint smell of diesel signifies that these lifts are typically not the cleanest ones around, and nostalgia aside, ski areas have found a way to make their energy cleaner on lifts, without sacrificing uphill capacity.

The good news here is that unlike the carbon footprint of the flight that may be required to get to some of the most desired skiing destinations, the resorts themselves are often at the forefront of environmental sustainability. Palisades Tahoe and Alpine Meadows made news in 2018, when COO Andy Wirth announced that the two resorts were in the process of a “strategic changeover to 100 percent renewable-sourced energy”, becoming the first resorts in the US to operate in this fashion. 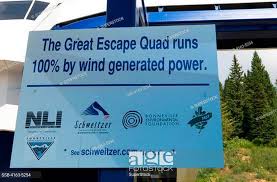 Schweitzer Mountain in Idaho gets it

More than most industries, climate change is a big issue for skiing in general, as you can’t ski if there’s no snow to ski on! Anyone who has spent time on the machine-made equivalent knows that, while it will do for the beginning of the year and for things like building massive terrain park jumps, it is just not the same as the soft, fluffy stuff that helps to draw in millions of folks during the wintertime.

While bureaucrats haggle over the whether a carbon-offset market is environmentally beneficial – spoiler, it is – most mountains actively purchase renewable energy credits, which help to offset their energy use. Even though, like everything else these days, mountain ownership has been consolidated in the US and beyond, with most resorts owned and operated by either Vail or Alterra, they have fortunately recognized that, not only is being environmentally forward a selling point, but it is also a necessity. If only other industries came close to having this attitude, but I digress…

Alongside the offsetting of energy usage through either renewable energy credits, wind/solar power, or some combination of the three, many of our favorite mountains are committed to reducing the inevitable waste produced from having to keep millions of people fed and watered. Initiatives to ban plastic at mountains like Taos in New Mexico (which, incidentally, is one of the many things that make this resort charming, as we’ve previously profiled), as well as the push for many mountains to increase the availability of composting and recycling has aided tremendously in managing that waste. Now, we get it – a lot of this crap may eventually end up on beaches in Southeast Asia, but the resorts are doing the right thing by at least assigning a cost to many of these actions.

Some resorts, like Sugarbush in Vermont take it to the next level, with employees deemed “Trash Talkers”, who serve to educate the body public about why it’s important to pay attention not only to what is recycled, but how it’s recycled as well. A fat lot of good it does anyone if the materials are not ending up in the right place, and like anything in the renewables arena, the more attention, time, and, obviously, money that is put into these activities will only improve their efficiency further.

Now, as this is a stern article compared to what we typically like to write about – that is, shredding epic pow – we do want to pass along these simple tips for you to keep in mind the next time you find yourself itching to head up to the hill: Learn to know and love the differences between these bad boys

First, consider carpooling, or if you live in an area with good public transportation to the mountains (as we’ve profiled here), consider taking the bus up to the slopes. Sure, the pandemic has kinda messed up being in close spaces with people, but you can still make new friends, even with a mask on!

Second, bring a water bottle! Not only will you save yourself 5 or 10 bucks on the overpriced stuff at the mountain, you’re also more likely to leave with it, instead of scattering it on the mountain, to only be seen again as the snow recedes in the spring.

Third, and somewhat related, if you see trash on the mountain, pick it up! Most mountains are littered, pun intended, with trash/recycling/compost bins, and it is fun to help our old friend the environment, even in the smallest of ways, by picking up that which someone else has left. Feel free to post the act of you doing so on Instagram – who knows, you might start the next movement!

Either way, remember to check with us first for the best deals on tickets, lodging and gear rentals!