That time is upon us friends, when the dreaded thaw happens, and the inevitable lurks on the horizon. We can count on some late-season storms, but the prime window for powder skiing decreases drastically when the sun becomes more of a factor. As the snowpack slowly recedes, conditions in general become more variable. Nothing to harsh a vibe like cruising at a nice velocity and running into a patch of sun-affected snow that acts as a speed brake! If you’re not paying close attention, you might get bucked forward and get a mouthful of slush. While it’s good to get refreshment directly from the mountain, I’m not a huge fan of the whiplash.

How to get around this is easy, and it even involves sleeping in:

Plan on getting to the mountain around 10:00, 10:30 if the clouds are out. Sure, you can ski a few runs before, but it’s usually frozen over from the night before, and it makes for some scratchy, unpleasant skiing. By around 10 the slopes warm up enough to where ski edges can again dig into the snow surface. You can of course get to the mountain earlier – it’s always nice to grab a burrito or a Bloody Mary and watch the day unfold in a beautiful place, but either way, another perk of spring skiing is (powder days notwithstanding) that the traffic calms down a ton, especially at the resorts themselves. This in turn makes it easier to find parking, and with that, provided it’s allowed at the mountain, you can bring your dog! 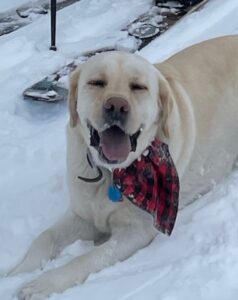 This big man enjoys chasing after crows in the parking lot

Seeing a pack of dogs romping through the snow adds greatly to the ambience of the day, though it almost goes without saying that it’s good to ensure your dog is not just gonna tear off into the woods surrounding, ‘cuz that’s just a pain for everyone.

The prime part of the ski day has no rules, but there are certain guidelines you probably want to keep in mind:

The Cookout
If the slopes are turning into sticky mush, plan on calling it a day at around 1:00-2:00, and turn to the other, equally important aspect of the day – the cookout. On a nice sunny day, after putting in a good couple hours and working up an appetite, there is nothing better than a nice cookout in the parking lot. The beauty of it lies in the fact that, fancy or not, solo, two people or with a whole crowd, you’re up there celebrating the fact that you get to rocket down the mountain on pieces of wood, then let a machine take you back up to do it again. So throw them brats on the grill, crack a cold bev with the gang and revel in the fact that there’s no better way to spend a day.

It’s not required, but it is recommended to let the dog steal a piece of sausage, or a hot dog bun, because they are a good boy or girl and have likely sat patiently in the car while you’re off having fun skiing. 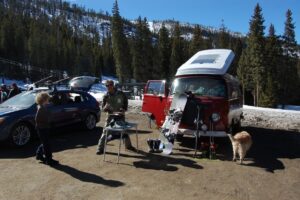 Regardless of whether your day consists of 9-4 never-say-die skiing, or if it’s more of a ‘I did a couple runs’, check with us first for the best deals on tickets, lodging and gear, so you can have more in your wallet for that cookout.