The lengths some will go to be first

It’s officially ski season in most of the West, and some of us have been lucky enough to have been treated to several feet of the good stuff so far. A welcome change from last year, where, at least in the Front Range, it was dry, dead, and, disturbingly, burning up until the New Year. And while we take for a given that the first couple days of the year are going to be on mostly machine-made crud, it’s simply not the expectation for around Christmastime.

Regardless of what the snow is looking like, a time-honored tradition in the West is to claim the bragging rights of being the first ski area to open for the year. Some of you might ask “what’s the rush to ski on the ribbon of death?”, and truth be told, that is simply not the point. Nor is it fun to stand in a long lift line for just one measly run. But bragging rights last forever, or at least until next year. 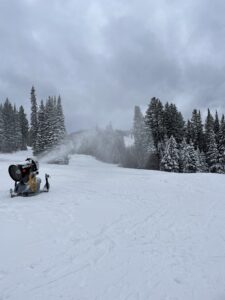 Looking pretty good for being open only one week!

According to skicentral.com, there are 6 US mountains officially open on the year. In Colorado, A-Basin has occupied its usual spot as the first to open, with the chairs starting to turn on October 23rd. Keystone was second, followed by a bit of a surprise – Winter Park opened on Halloween, marking its earliest opening that your author, a lifelong devotee of the mountain, can remember.  In the Midwest, Minnesota’s Wild Mountain and Andes Tower Hills got the jump on A-Basin with an October 18th start, followed by the delightfully named Trollhaugen in Wisconsin on the 19th.

Given A-Basin’s elevation advantage over most every other mountain in the west, it makes sense why they can open earlier and stay open the longest – it stays colder up there, and cold = good for snowmaking ops. Which is what made a year like 2021-22 so unusual, in that it was often too warm last year for snowmaking to be effective. Not only that, but if it’s too warm, it becomes wasteful. It shouldn’t come as a surprise, but ski areas use a ton of water for machine-made snow, which, when evaluated against the progressive desertification of the West, does not seem to be the most viable long-term solution, but hey, the demand is there.

Pipped at the finish line 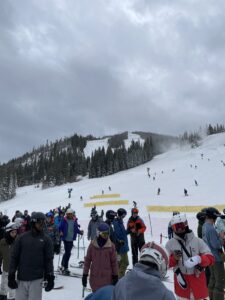 With all that out of the way, no discussion of the season starting is complete without what is, in your author’s humble opinion, one of the cheekier (and sure, a bit petty) ways in which A-Basin was able to defend its title as the first to open in North America.

For the reasons stated above, A-Bay has a distinct advantage over its competitors to open first. That was tested in 2019, when Keystone, having recently completed extensive upgrades to its snowmaking equipment, announced its plans to open on Saturday, October 20th, which would allow it to squeak past A-Basin for first to open.

The announcement was made on the afternoon of the 19th, but A-Basin, not to be outdone, topped that by stating that it would open at 3:30pm on the 19th. The backstory that adds a bit of drama to this is that A-Basin had recently left its partnership with the other Vail resorts in the area, so this was as much an ‘in your face’ to the resort group, as it was an actual need to be open first. And I’m sure you’re thinking what I’m thinking – there are a lot more desirable times to be skiing than at 3:30 in the afternoon, but sure enough, there was a line of about 200 diehards ready to start the year in style.

Whether you plan on being one of the crusty shredders in line for the first day, or if you prefer to wait a bit and let the actual snow fall, don’t forget to check with us first for the best deals on gear, tickets, and lodging on your next big trip! 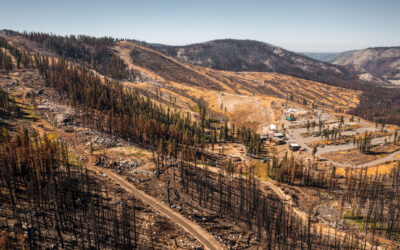 Sierra-at-Tahoe Has Risen from the Ashes