Ski Fashion through the Decades

Skiing ain’t what it used to be.

Having really only sprouted legs in the US after WWII ended in 1945, skiing is still pretty young. Despite its youth, the sport/lifestyle that we know and love has gone through many phases of fashion. Here’s a rundown of the major trends of each decade starting all the way back at the turn of the 20th century when skiing was focused primarily in Europe. Hold on to your hats! Or Deerstalker?

Skiing in the early 1900s was scarcely used for entertainment. Any terrain worth skiing required a hike and skis lacked important innovations that made them remotely fun to use. Skis at that time were better used for just getting around on snow.

For a more in-depth commentary on the history of skis, check out this article on the most influential people in ski history.

Reflecting the simple use for skis and lack of advances in technology, fashion on skis looked about the same as fashion on the streets. Men wore trousers and the few women that participated generally wore dresses. Speed was never a part of the equation. 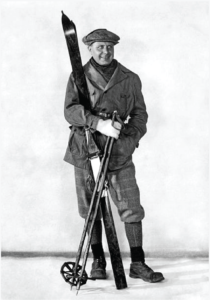 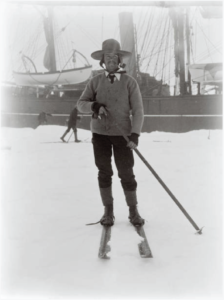 While the roaring twenties ushered in new economic growth in the United States, they brought on a great schism in the European skiing community. While some folks were still determined to cover the most ground on skis, others were discovering the joys of flying downhill. This was the beginning of the divide between alpine (downhill) and cross-country (mostly flat) skiing. Then a major event took place that would shift ski fashion forever–the first Winter Olympics in 1924. From that point, ski fashion started to become more functional (read: tight fitting). The progress to Spandex’s invention in 1958 was slow, but it began here. 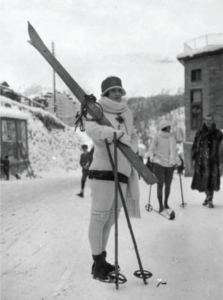 By the 30s, alpine skiing was really gaining traction–this time in the US as well. In 1936 the first chairlift was put in at Sun Valley by none other than Union Pacific Railroad. Now all of the sudden skiers could ski downhill without having to hoof it uphill first. Trousers became normal for women on the slopes, but men still stuck to the standard slacks-and-sweater look that became the norm in the early 1900s.  All of the sudden, speed started to creep into the conversation. 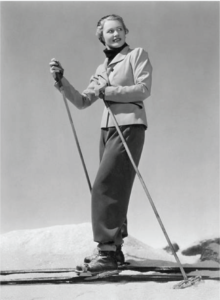 Thinner and ever so slightly tighter we go. WWII ended in 1945, which brought in new styles from soldiers and a strong interest in recreating in the mountains. Aspen opened in 1946 with its first chair lift and people were flying down the snow in no time. 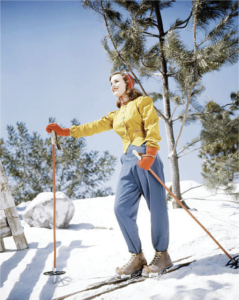 Spandex may have been invented in 1958 but it took a little more time before it was readily adopted by the public. Fashion trends were still struggling to break free from regular street wear, but the polyester sweaters did become a thing around this time. For once, skiers could have something that wouldn’t be completely waterlogged by the end of the run. 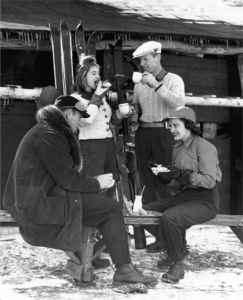 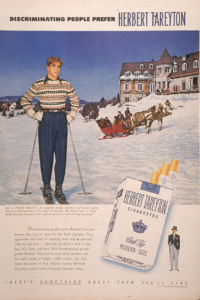 By the 60s, Spandex had worked its way into the industry under the name Lycra and the colors were off the charts. Bold prints and psychedelic patterns were easily spotted across the slopes, along with some snazzy colors. Take these folks pictured below, for instance. They weren’t ready to weather a full on snow storm but they were there for a good time. 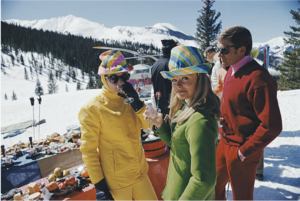 Skiers in Aspen in the late 1960s
[Source: Getty Images]

Alright, finally Spandex. Like real Spandex. Full suits made of the stuff made its way to the slopes and skiers discovered how much it could move with their movements. But they had to be colorful right? There was no greater way to display your colors than by covering your skin top to tail with fluorescent colors. It turns out this would be a precursor to the flashy 80s that we’re oh so familiar with. 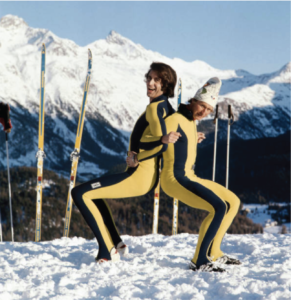 And here they are. The 80s. Big hair. Big color. Big time ski fashion. The 80s was all about colorful snow suits, headbands, and more color. The 80s ski community welcomed new technology in that allowed clothing to be more breathable, waterproof, and warm. No longer did they need to freeze to death while wearing their spandex suits–skiers could now sport their bright colors in style and comfort. 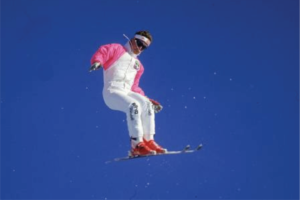 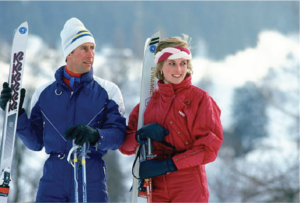 Like the 80s, the 90s was still pretty colorful. Full body ski suits were still the norm, but the hair started to flatten a little bit. Helmets were still out of style though, and it would take another decade or so before those to become cool. 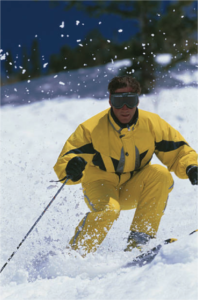 Starting in the late 90s and extending into the the early aughts, skiers and riders switched to something a litter baggier. Around this time, snowboarding culture was booming and the styles of baggy clothes that might be found at a skate park quickly made it to the ski slopes. Steeze was in the picture now. 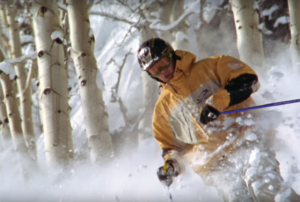 Welcome to today. Ever since the first Olympics, ski gear has been on a march towards functionality and technicality. Look at any ski shop today and you’ll see every piece of technology ever invented stuffed in ski jackets and ski pants. Today it’s all about getting the job done, staying warm, and staying dry. Helmets are the norm, reflective glasses are the norm, and there’s a nice balance between slim fitting and baggy. We may be a little biased because we’re living in it, but is it safe to say we’re in the golden era of ski clothing? I mean, I like the way my gear fits now and I like to ski in it. What could possibly be next? 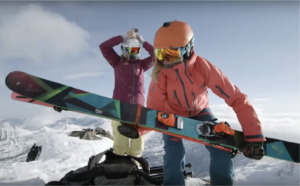 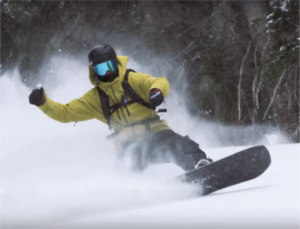 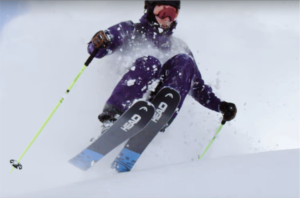 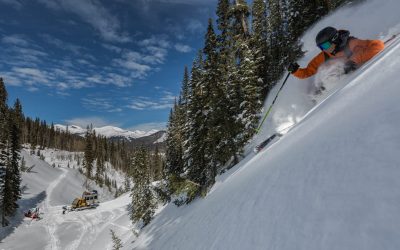 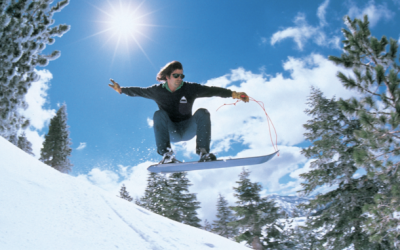 If you didn’t catch part one of this series, we are taking a tour through yesteryear and identifying some of the people who were instrumental in making skiing the popular sport that it is today. The folks we’ll profile in this list could be considered the modern... 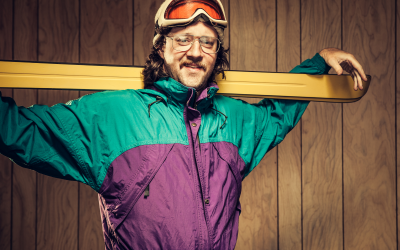 Five Ways to Do Thanksgiving Like a Ski Bum

Does a turkey burger count as Thanksgiving turkey? These are the questions you should be asking yourself this year if you want to do Thanksgiving like a ski bum. Before we let you answer that on your own, here's five ways you can unleash that inner bum that's itching...

Ski Towns That Fly Under the Radar 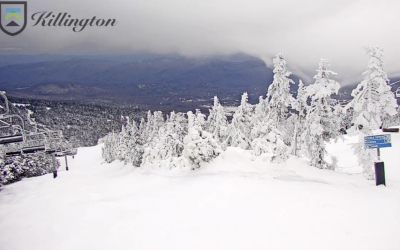 The itch for early skiing is real. This is the very special time of the year you start to feel the first hints of winter, but there still isn’t quite enough snow to ski. It’s a frustrating time, but also hopeful one. it’s also, depending on where you live, the last time you might see grass until the spring. 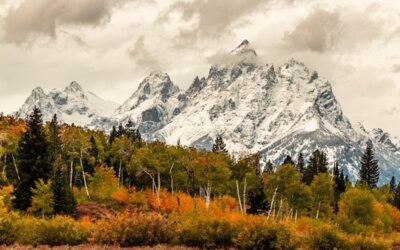 Ahh, it’s that time of year again. It has many names, among them “ribbon of death” season, “shark” season, and of course “wait in line for 25 minutes to ski one crummy run” season. They all are referring to the same thing, which is the somewhat gnarly conditions we...