If you didn’t catch part one of this series, we are taking a tour through yesteryear and identifying some of the people who were instrumental in making skiing the popular sport that it is today. The folks we’ll profile in this list could be considered the modern giants, and obviously there are too many big names to profile in just one blog post! 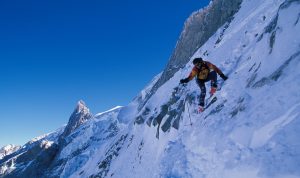 Uhhh, that line? No thanks… Photo: Colin Samuels

We start with Doug Coombs, who left his mark on the skiing community in a number of ways in his tragically short life. Coombs began as an alpine racer, but was drawn to the backcountry surrounding Jackson Hole, eventually founding a camp along with his wife, where they taught eager, fearless youngins the ropes in what is frequently no-fall territory. If you’ve ever been to Jackson, you’ll know that it’s just about the gnarliest territory you can find outside of Alaska. After making a name for himself with his daring feats, including winning the world freeskiing championships twice in the early 90s, Coombs relocated to Valdez, Alaska, where he helped to popularize heliskiing to a mass audience.

After the success of his heliskiing ventures, Coombs sought a different challenge, and found himself scaling the terrifying steeps of La Grave, a commune in the Alps of Southern France. Just one look at that trail map is enough for me, but you can be the judge. Sadly, while attempting to ski the treacherous Couloir de Polichinelle, Coombs slipped and fell to his death, along with another member of his party.

A tragic death, no doubt, but hey – he went for it, and in my mind if you’re gonna go out, go out big, just remember who you might be leaving behind! 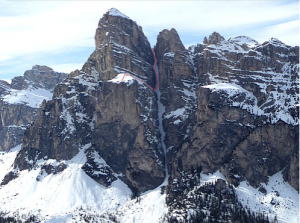 Speaking of big-time skiers who met tragic ends, it wouldn’t make sense to have a most-influential list without Shane McConkey included. Like Coombs, McConkey started out as a competitive alpine skier, but quickly moved to freeskiing, helping to popularize, along with Coombs and many others, what has become known as extreme skiing.

Alongside his infamous nude skiing adventures, which hilariously resulted in a lifetime ban from Vail Resorts, McConkey was also instrumental in developing the first ‘fat’ ski, which could be used to float on powder, and thus make it much more accessible to the masses, and not just to the most expert skiers. His initial design became reality in the Volant Chubb, which developed a cult following, and remained the standard until the rocker/camber revolution that followed about a decade later.

Ever the adrenaline-seeker, Shane eventually moved on to combining BASE jumping with skiing – something he successfully pulled off at the Eiger in Switzerland, but alas, while performing the feat in Italy in 2009, he was unable to release both bindings in time, resulting in a fatal fall. 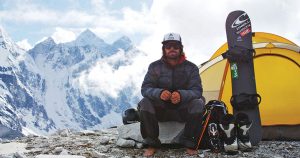 Happily, not all extreme skiers or riders have met the same fate, and Jeremy Jones’ star has shone brightly, both as a pioneer in snowboarding in the ‘80s, up until the present day. Jones is an easy guy to root for, with his unorthodox, albeit awesome approach to riding big mountain, alongside his shaggy hair and perpetually positive demeanor. As the sport was growing in popularity, he helped define the ideal style, and has continued to evolve with it, especially as we get into more uncertain times vis-à-vis the climate.

Considering this, in 2007 Jeremy founded Protect Our Winters, a non-profit dedicated to helping people who love the outdoors help the outdoors. Jones has forgone the use of helicopters and for the most part, lifts, in the time since and has helped to inspire a new generation to approach the mountains with the kindness and understanding they deserve. Through his Jones Snowboards brand, he has helped to grow the market for splitboards and more importantly made them much less of a pain in the ass to use, should you find yourself on the mountain with one and not your regular setup.

Alongside Jeremy Jones on the Mount Rushmore of snowboarding is Jake Burton Carpenter, the founder of Burton Snowboards. Burton, like most of the guys on this list, started out as a competitive ski racer before a car accident ended his career while he was in college. After graduating with a degree in economics, he worked as an investment banker for a time, but realized quickly (like most of us should) that he wanted to be on the slopes, and not working 12-hour days.

Though the early going was rough, Burton was ultimately successful in promoting snowboarding, and helped to popularize the activity across the US and worldwide, although some holdouts still remain (looking at you, and your pristine, falling-leaf-free glades, Alta!). Snowboarding has gone from being transgressive to being pretty much a 50-50 in terms of skiers and riders participating. Burton sadly passed away in 2019, leaving behind what has become a business empire, and no doubt serving as the inspiration for many a young rider. 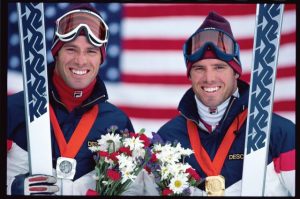 Shifting gears here for our last profile, it’s actually two, equally worthy fellas: Phil and Steve Mahre. Unlike the skiers and riders profiled above, twins Phil and Steve, who literally grew up at White Pass in Yakima, Washington, were able to stick with ski racing, and in doing so became the first US Men’s ski racers to win Olympic Gold, though honorable mentions must go to Billy Kidd and Jimmy Heuga for their efforts two decades prior. Phil won gold medals in the combined event at Lake Placid Olympics in 1980, and the slalom at Sarajevo in 1984. Alongside this were several years of excellence on the World Cup Skiing circuit, where Phil was the first American to win the overall title in 1981. Steve was no slouch either, bagging a gold in the giant slalom at the world championships held in Schladming (the name just rolls off the tongue, doesn’t it?) in 1982, along with a runner-up finish in the slalom won by his brother in Sarajevo.

For years, the US had lagged behind Europe in alpine racing, and the Mahre brothers helped to inspire a generation of skiers, as well as finally giving the US a successful rebuttal to Europe when it came to alpine skiing primacy.

While the years since have only seen a handful of US champs in Men’s Skiing (hey Bodie Miller!), the women’s ski team has been going strong for years, driven in the ‘90s by the powerful legs of Picabo Street, to those of Lindsay Vonn and Mikaela Shiffrin today.  Alpine skiing is certainly a niche sport, and an expensive one at that, but watching a racer gracefully carve up the snow is always a great way to pass time while heading up for the next run or taking a break at the lodge.

It’s entirely possible to see the world’s pre-eminent racers in action in the year ahead, as most bigger mountains across the United States and Canada hold alpine racing events throughout the winter, but like always, don’t forget to check with us first for the lowest rates on ski tickets and lodging before you go!