Who said you couldn’t have sun and snow?

There are a few ski resorts in the country that really do have the best of both worlds–lots of sun and lots of snow. We’ve ranked the top 5 ski resorts in the US based on average sunny days that also get at least an average of 150″ of snow per year because it doesn’t do any good to have a bunch of sun and no snow–that’s what the beach is for. We’ll start at number five!

Surprise surprise, Colorado is sunny. If there’s one factoid that the Centennial State likes to promote, it’s the sunshine. Yes, Colorado gets tons of sun, but they also get good snow–it’s what makes skiing in Colorado so special. Storms will blow in and then the next day, or sometimes within the same day, the clouds will part and you’ll be skiing powder on a sunny bluebird day.

[Read: Why You Should Ski Aspen Snowmass This Year]

Thanks to the reliable snow at Aspen, your chances of catching a bluebird day are some of the highest in the state. The town of Aspen is also a great place to don some shades and have a stroll beneath the rays. There is plenty to do and plenty to see! 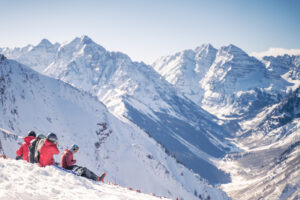 Like Colorado, California also is directly in the bullseye of the sun. The only difference between the two states is that California gets a heck of a lot more snow. The density is different, so you won’t necessarily be floating on air like you would in Utah, but with a slightly heavier snow, the coverage is excellent. California is also prone to massive storms (maybe you’ve heard of the atmospheric river?) that roll in, drop their snow, and move on out of the way.

[ Read: An Atmospheric River is about to Dump on California’s Mountains (2019) ]

Luckily, these mega Sierra storms are predicted fairly far in advance. When you see one in the forecast, expect an unthinkable amount of snow followed by–you guessed it–that sweet sweet sunshine. 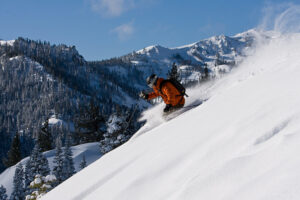 Crested Butte (CB) is one of the most iconic Colorado ski towns that also happens to collect a massive amount of sunshine. Don’t expect the sun to be warm here, though. CB gets COLD (average lows in January are -6°F) but the skiing is memorable. On a bluebird day at the top of Mount Crested Butte, you can see the sweeping Gunnison Valley and the town of Crested Butte below.

When you’re not skiing, the town of Crested Butte is a perfect place to spend a sunny afternoon. Be sure to head to the Last Steep Bar & Grill, one of the iconic Crested Butte hangouts. 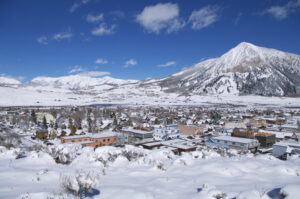 Back in the land of sunshine, this Southern California mountain welcomes the sun with open arms. Mammoth is similar to Tahoe in that it receives massive amounts of snow during fairly short windows. For example, on average Mammoth receives its 313″ of snow over the course of just 46 days–that’s just over 6″ a day! By most standards that would be considered a powder day. For comparison, on average Aspen receives its 289″ of snow over 62 days–only 4.6″ a day. These Sierra storms are no joke. 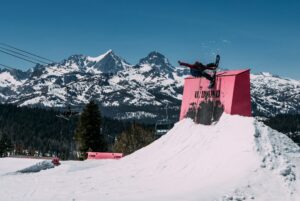 Finally, with 39 more days of sunshine throughout the year than the number 5 resort, Taos Ski Valley loves some good sunshine.

They are not known for getting the prodigious amounts of snow like the resorts mentioned above, but they do get great snow and the terrain is legendary. Not only that, they also have one of the most fascinating and unique towns, Taos, just 30 minutes away. The town of Taos is 2,400′ below the base of Taos ski valley so the climate doesn’t reach the same extremes that the mountain does. If you’re staying in town, that means warmer temps and more sunshine (January avg low – 10°F/ avg high – 44°F). 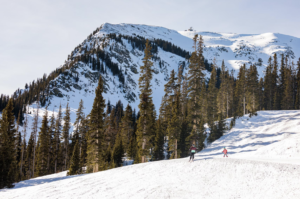