The Conditions for Perfect Powder

Ever wonder what makes for the best snow?

We’ve all heard of that legendary “champagne powder”, but what really goes into that, and how does it differ from the legendary – ok, maybe infamous is a better word – Sierra cement?

Well, dear reader, the first ingredient in all of this is moisture, or specifically lack thereof. The further inland you go, the drier the snow. Not only is that a neat and corny rhyme, but it’s a good rule of thumb. Following that, another element that is super helpful for that light, fluffy stuff is elevation. Sound like a couple states in particular to you? Well, you’d be right in that: Colorado and Utah are world-renowned for the quality of their snow, and it is due in large part to the aridity of the region. We’ve covered in brief why aridity is a problem that is only getting worse in the West, and various attempts mankind is doing to buttress this, but the fact remains that it makes for the best snow, qualitatively speaking, that you can find anywhere.

Another factor to consider when it comes to the ideal white stuff is the amount of wind that can be expected. Huge mountains like Jackson Hole or Big Sky routinely get dumped on, and boy oh boy is that some nice powder. Given, however, that both have parts that are rather exposed, the wind takes its share of the snow and deposits it elsewhere. A few humble favorites in the Front Range, Eldora and Loveland, are subject to this to as well. The important thing to keep in mind with the wind is that it’s being deposited somewhere! What that means, practically speaking, is that you can have a radically different experience on the same mountain, on the same day, depending on which slopes you make your way down. This is also why we maintain that some of the best snow awaits in the glades, as they act as a perfect windbreak, leaving the snow light, soft and equally as important, consistent. 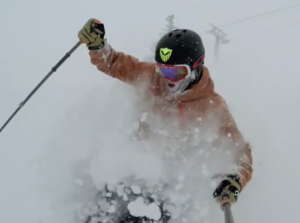 As mentioned above, Utah is home to some of the most amazing skiing, which mountains like Alta/Snowbird and Park City regularly topping the best-of lists. This is due in large part to the big ol’ salt lake that lies to the west of the Wasatch range, where most of these mountains are located. While that may seem a bit hard to believe now, given the current slump in Utah, the 450 inches that fall each year on average should help keep the faith! According to researchers at the University of Utah, the Great Salt Lake contributes to snowfall in three key ways: 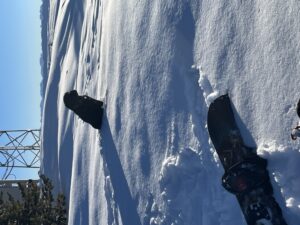 This powderhound knows where to find the best snow!

While the three factors combine to have an oversized effect, the last factor here, having surrounding mountain ranges act as a funnel, is a key ingredient to any area with major snowfall, lake notwithstanding. Most of the mountains on the inches/year leaderboard have a funnel effect going, and it allows the storm cells to linger and linger! After braving through a dry January and a frustrating start to February, let’s hope that we see some more of those moving our way!

Regardless of whether it’s sweet pow, or maybe just nice groomers on which to hone your technique, don’t forget to check with us first for the best deals on tickets, lodging and gear!