As the last week has shown, most of us have seen how quickly a ‘meh’ season can change into one that will live long in the memory. With the West getting pounded, and I mean pounded by snow, we enter what many consider to be the best time of the year – when the good stuff really starts to open at most mountains.

Christmas has passed, and I hope that you, good reader, got everything you were hoping for on that blessed day. The good news is that the presents are still coming for most of us, in the form of snow-globe days and snowfall that has consistently beaten the expert’s predictions for most major resorts. And what does this mean for those lucky enough to be at the mountain? Why it means that it is rope drop season, my friends! Gone are the days of the ribbon o’ death, with everyone and their mother funneled down an increasingly treacherous slope. Amazing what a foot and a half of the good stuff can do, right?

The rope drop itself is an experience to behold – you’re riding up the lift, no big deal, but then you see a handful of ski patrollers with a big bundle of rope in their hands, and that which was off-limits is now very much fair game! Suddenly the lift cannot move faster (especially so if you’re on an old two-seater) and with it comes a mad rush to be the first to claim those pristine lines. The unpredictability adds to the mystique, as runs that were closed in the morning have a chance of becoming open throughout the day. Heck, it may even be two o’clock when you find yourself beholden to an inviting line, which can quickly turn a run to the car into ‘screw it, I’ll do this ‘til my legs are shot!’ 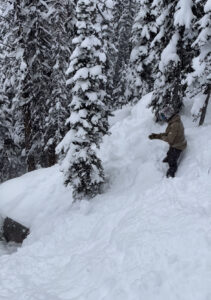 Here are a few more reasons why rope drops are the best, as well as a couple things to look out for:

While this doesn’t apply to every mountain, most at a certain point will have some fearsome moguls, the size of dune buggies, that will make even the most experienced skier’s knees weak. But not at the beginning of the year! Setting the moguls is a majestic experience, as it usually involves skiing down a powder-filled run. It’s a thankless task, really, to set the slope for the rest of the year, and obviously it’s super fun. Just be careful not to mash yourself on any rocks or tree stumps that may be lurking!

Like mentioned above, the rope drop involves setting the trail for the rest of the year. Once it’s packed, it’s packed, although a ton of pow can certainly change that temporarily. Before that, though, is the primo stuff – that deep, deep powder, the best kind for face shots. There is nothing quite like an unbroken, untracked line to up the stoke for the year and help stave off fatigue for at least a couple more runs!

Careful what lurks below!

With all this goodness comes a word of caution: there are many dangers lurking beneath the mesmerizing pillows and undulating waves of pure white. One false move and your year can be over before you know it! With this in mind, and especially considering it is still technically early season, skiing with caution pays off. If you’re lucky enough to have a pair of rock skis, this is the time to put those babies to use. Trust me, you’ll be glad you did when you accidentally uncover a half-dozen rocks coming down the slope.

Jackson Hole, Palisades at Tahoe, Whistler, Snowmass – they’re all getting the good stuff right now, and you can be the lucky one to get to experience that bliss that is a rope drop, even if it’s not at one of the legendary hills. Powder is powder, after all. Regardless of where you find the soft stuff to whoop and holler in, check with us first for the best deals on tickets, rental gear and lodging!