What to do about these epic lift lines?

If there’s one thing that’s popped up in everyone’s minds, social media feeds, and conversations around skiing lately it’s lift lines. As consolidation among ski areas continues to be the norm, an increasing number of people are finding their way to the same slopes. Some argue that consolidation has increased access to a sport that has a formidable barrier to entry by reducing the cost of a season pass, while others say that consolidation has pummeled the authentic ski experience and created havoc in those pesky lift lines.

Deciding where to ski can be difficult, especially when you realize that your day off work is everyone else’s day off work, too. To avoid zoo, there’s a very simple solution–ski at independent ski areas. Here’s a few reasons why, in addition to avoiding the aforementioned lift lines, you should ski independent.

Who here likes walking in ski boots? I hope nobody said yes to that question. Honestly, its one of the most awkward thing a human body can do, so why prolong it? Small ski areas get less traffic so there’s really no need to have a massive parking lot with a shuttle like you’re zipping around Denver International Airport. Instead, you can park a reasonable distance from the base and enjoy the short stroll to the lift. Sounds nice, huh? 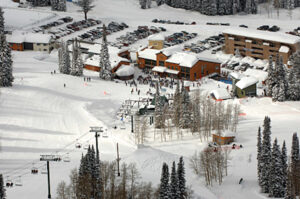 It’s all about the vibes at small ski areas. Independent ski areas are the protectors of ski culture and work really hard to keep it that way. When was the last time you had several members of the staff genuinely thank you for coming to the mountain? It may seem like not much, but it makes a big difference. Never mind the gas powered fake fireplaces–these places have real fire and maybe there’s a gaggle of kids roasting marshmallows around them, too. (See the gaggle of big kids around the fire pit at Magic Mountain in Vermont below). And the base lodge? It’s simple, really simple and the french fries are affordable. This is the kind of place you can lose your phone on the mountain and you’ll probably get it back within a couple hours plus a free candy bar or something. 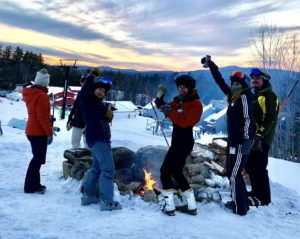 Do you know what happens when not so many skiers visit a particular slope? The snow sticks around. Big Sky does well to keep snow around because they have such an insane amount of skiable acres that it’s impossible for skiers to hit everything. On the flip side, when you have significantly less terrain but also a fraction of the skier visits, snow just stays good for a longer.

So when you’re thinking about where to go during a busy holiday weekend, here’s a few good independent options to get you started. Now, go enjoy those tiny lift lines.