What Makes a Great Groomer?

As it’s a few more days until we get the next round of the fluffy stuff, it pays to have something else to do on the mountain. The bumps start to get a bit hard, our friend the sun can start to affect the slopes below, and all but the most creative powder lines have been taken in the trees. What does one do when in the middle of the drought? One word: Groomers.

A groomer, or groomed run, can be so many things to so many people. For those that love nothing more than pounding moguls, it can be a nice chance to rest between the end of the bumps and heading to the lift, to do the same thing over again. For many, it’s the place to learn once the bunny slopes are in the rear-view mirror. The beautiful thing about the groomers, though, is they are first and foremost for all. 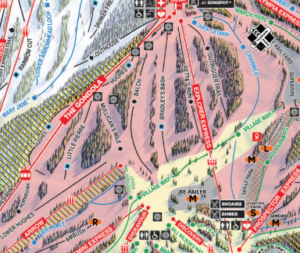 What elements go into making a great groomed run? First is the presence of a nice pitch. Too gentle and it’s best for beginner turf, too steep and you feel like you’re competing in the world cup downhill. An example of the latter is the run Norwegian (see image) at Winter Park – it’s steep, icy, and doesn’t hold a ton of snow, and as such, probably best left to racers and speed freaks. But snaking around it is a classic groomer, and the first named ski trail at Winter Park, Hughes, which, in case you were wondering, is named after Berrien Hughes, a skiing pioneer whose tragic death in 1939 cut short what would have been many years of illustrious skiing pursuits.

Observers may note that Hughes is classified as a blue-black, which might be beyond what they (or their friends and family) are looking for. The beauty of large mountains, however, is the variety. Happily, you only have to look slightly to the right on the map to see a perhaps more fitting example from Winter Park, Cranmer. Named after George Cranmer, whose other claim to fame is overseeing the construction of a certain world-renowned amphitheater in Morrison, Colorado, Cranmer represents a perfect compromise. It is wide enough to accommodate a ton of skier traffic, has a delightful array of steep pitches, and it also has flatter aspects, all of which make it great for the beginner and the shredder. 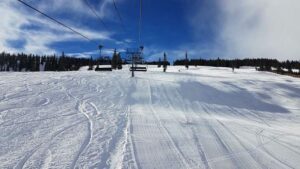 In keeping with the theme of wide-open spaces, which, aside from being an excellent album by the artists formerly known as the Dixie Chicks, is exactly what a groomer enthusiast is looking for, where else to look than the groomers served by the Big Burn lift in Snowmass? Dallas Freeway is like three football fields wide at point and represents a great opportunity to see juuuust how long you can make your turn. Not only that, but thanks to Aspen’s world-class grooming capabilities, you can be assured that the run is going to be smooth as butter, as opposed to cruddy chunder. 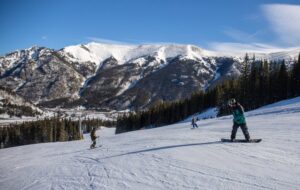 A great groomer, and not a bad view either! Photo Credit: Copper Mountain

Going back to the steeps though, and outside of places in Europe, where your author has sadly yet to venture, the best combination of both is probably found underneath the Super Bee lift at Copper Mountain. This trio of runs, Oh-No, Andy’s Encore and Collage, make for agreat place to see just how fast you can rip down the mountain, though as always, we urge you to stay in control! The Super Bee lift is a 6-pack with excellent uphill capacity, so you can count on having quick trips up and down the mountain. If you’re feeling like doing the reverse of what was suggested above, you can finish out the run with any of the black and double blacks that make up the bottom third of the hill.

These are but three mountains where the groomers flow like fine wine, and regardless of where you find yours, be sure to check with us first for the best deals on tickets, lodging and rental gear!