The itch for early skiing is real.

This is the very special time of the year you start to feel the first hints of winter, but there still isn’t quite enough snow to ski. It’s a frustrating time, but also hopeful one. it’s also, depending on where you live, the last time you might see grass until the spring.

Because skiing is a true joy, we’re always looking for a way to get out there and start the process. Few resorts are open now but there are some that have enough snow to slide on. And some are better than others. Here’s where to get your early season fix.

It’s still very early in the East but the fact that Killington is open is an absolute gift from above. Weather conditions cooperated early in the season and gave their snow guns the right conditions to lay a decent layer of snow. As a result, you can do a little skiing in the east. The trails are limited to Great Northern, Double Dipper-Upper, Rime, & Reason. It ain’t much but it’s honest work.

Looking ahead, there’s a storm a-brewing in New England. We’re hopeful that a fresh coat of up to 1ft of fresh snow combined with herculean snow making efforts will jettison the opening of several more trails. For now, just look at this beautiful coat up top at Killington! 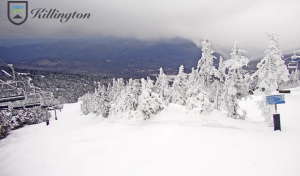 The second of the SkiBig3 group to open (for the record, SkiBig3 is Lake Louise, Sunshine Village, and Mt. Norquay), Mt. Norquay is open but pretty limited. Only one lift is open, opening access to right around the base area.  It’s always a roll of the dice this early, but from the looks of the webcam, the early season weather has been very friendly to the Alberta resorts. So far they have reported over 38″ of snowfall on the year. Not bad. Some nice early season turns could definitely be in store here–just don’t expect to be scoring first tracks on a fully open mountain. 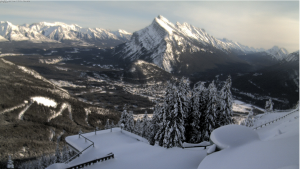 The snowpack is awfully promising at Lake Louise for the beginning of November. Receiving over 50″ of snowfall at the base already this year has really helped things along. The base area is reporting a 30″ base for God’s sake! Alberta is the place to be!

Four lifts are now open, providing access to over 18 runs mostly right along the main front-side corridor, and the Grizzly Express gondola opens tomorrow, Nov. 18th! With over 30″ of new snow, Lake Louise has been able to open quite a bit more terrain. We’re anxious for more terrain to open so we can see all the improvements they made last season and this season. Last season Lake Louise added 480 skiable acres in West Bowl with a new quad and this season they’re opening a new quad to open even more terrain. Needless to say, we’re looking forward to more snow falling on this hill. 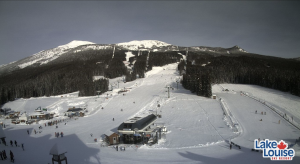 A-Basin is no stranger to opening early and is one of the most sure-fire bets to getting early turns. This season the lifts started spinning almost an entire month ago on October 17th, giving folks the chance to dust off the skiing cobwebs. Now they have opened both Black Mountain Express and Lenawee Mountain lifts, opening up one long run from top to bottom. If you start to get bored, though, it’s a real good thing that A-Basin has one of the best bloody mary’s in the state. Just don’t forget–alcohol hits a little harder at over 10,000 feet. 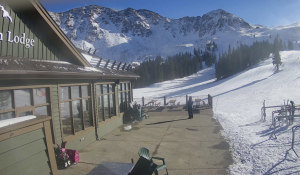 In the beginning of October, Mammoth strung together some pretty excellent storms. Then came the atmospheric river. At the end of October, a massive storm called an atmospheric river dumped over two feet of base building goodness and just like that, Mammoth was open. Since then, more storms have passed through, building a strong 32″ base at the top of the mountain and allowing Mammoth to open 38 trails accessed by 7 lifts–far more than any resort in North America. If you want to ride early and feel like you’ve had a full ski day, Mammoth is the only place to be. They say all good things must come to an end, but can we wait until May for that? 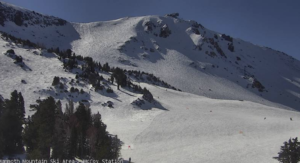